January 25, 2020
An old friend of mine, who I haven't seen in a while, was able to come over to try his luck with Crossfire.
We decided to play the 'Bocage' scenario from the 'Hit the Dirt' booklet for Crossfire.
It's a great scenario as it covers hidden deployment, the use of snipers, off board mortars, tanks and anti-tank guns.

Brian chose to play the British (I have no American miniatures) so I was the defending Germans.

My view looking North towards the British edge of the map. 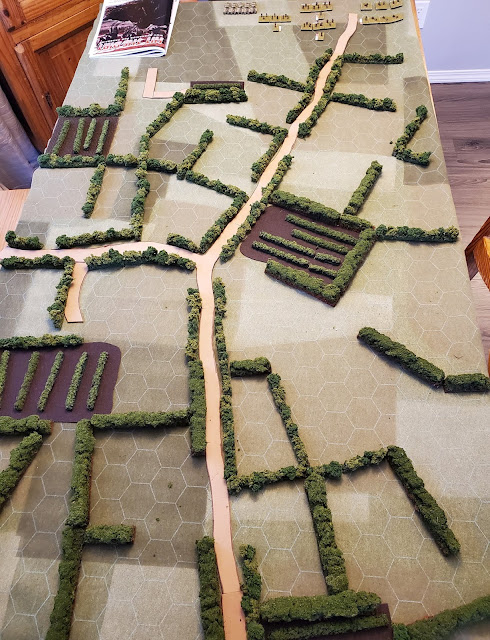 My objective was to hold a line of sight on the road intersection by the time the clock ran out. Start time was 0600hrs game would end at 1100hrs, advancing 30 minutes on every role of 5+ on a D6.
I had three advantages, hidden deployment, 2 minefields and 2 stretches of barbed wire.

The British advanced quickly on the West side of the road. Finding an open field (red chip) the Brit commander figured an ambush was imminent. He called up his Forward Observation Officers (FO) to give them a line of sight into the field so they could either lay down some smoke to cover the infantry advance or hammer defenders with High Explosives. 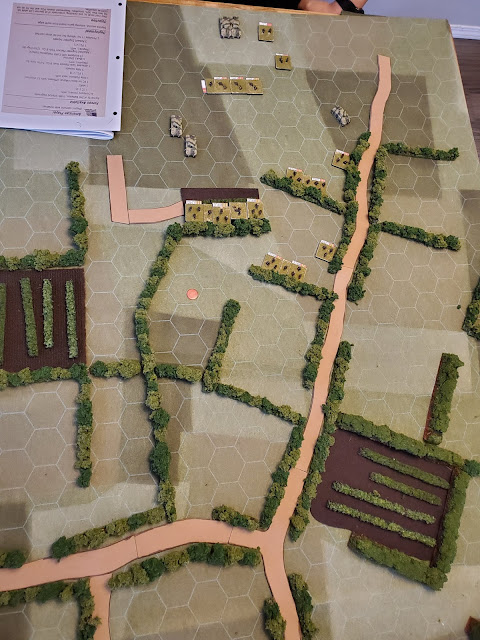 As soon as the FO entered the hedge to set up an OP, he was fired upon, the Germans were obviously still hung over from drinking French wine as they both had no fire results (meaning they could not reactive fire until initiative switched). 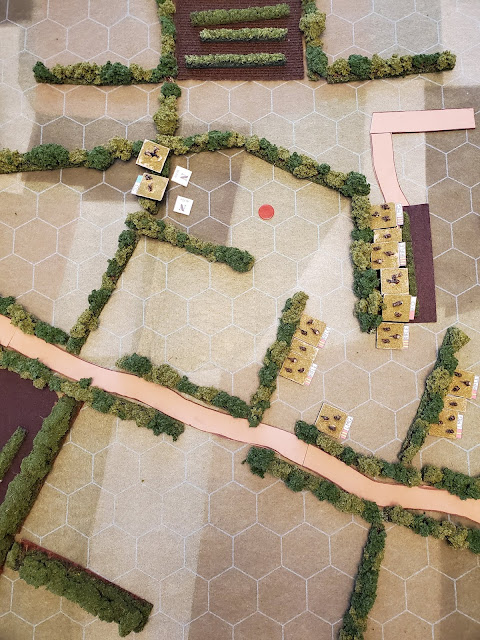 Brit 3rd platoon shot up the Germans and were able to suppress both the German HMG and the Company Commander squad. Seeing an opportunity in front of him the British Commander called for a fire mission from the FO to provide smoke for an infantry assault. The FO's were not able to get their co-ordinates sorted out, so the Commander ordered 3rd Platoon to assault the German machinegun nest. They charged smack into a minefield laid in front of the Germans positions 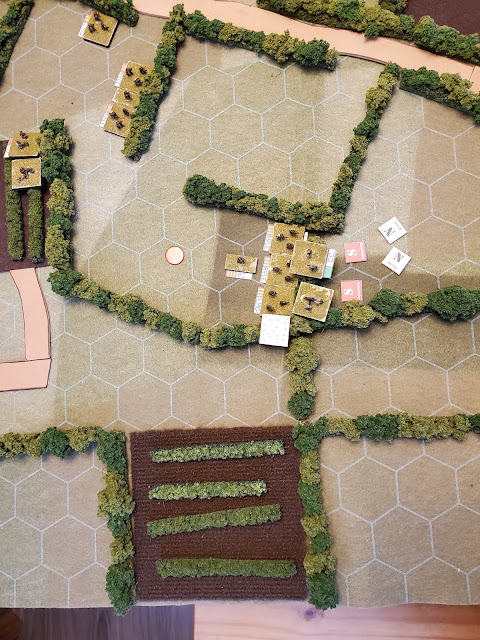 Fortune favours the bold as all three infantry squads made it through the minefield without suffering any casualties! Hungry for blood they assaulted the German position and wiped them out. 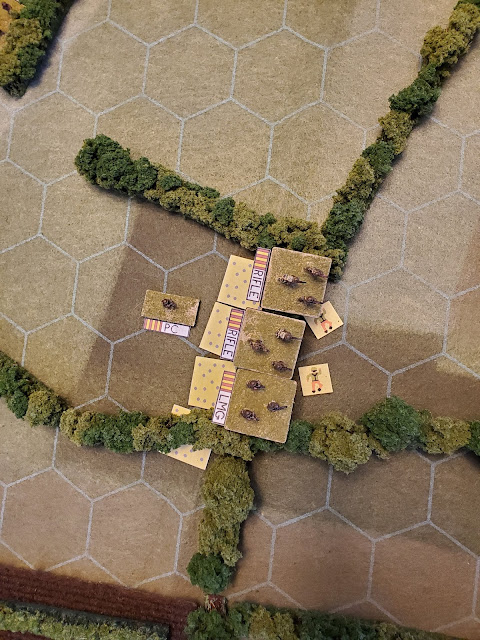 3rd Platoon commander realized how lucky his chaps were to make it through the minefield so he called his engineers forward to clear a path. 1st Platoon was ordered to make a flanking maneuver further to the West. As the lead section crossed over a road, he fell into the sights of a Germans sniper. An opportunity for the Germans to seize the initiative! BUT the sniper missed! 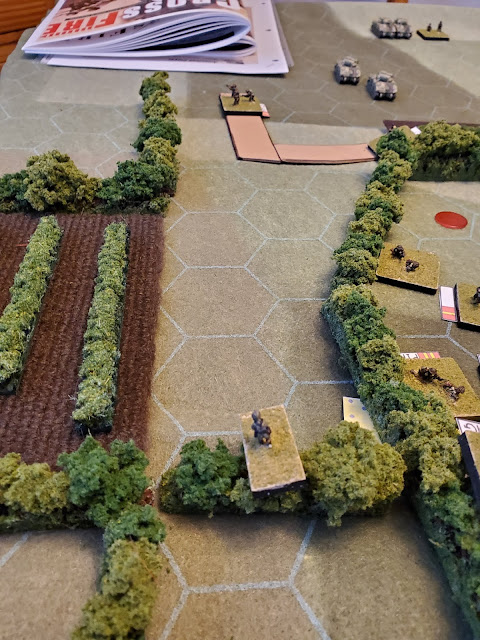 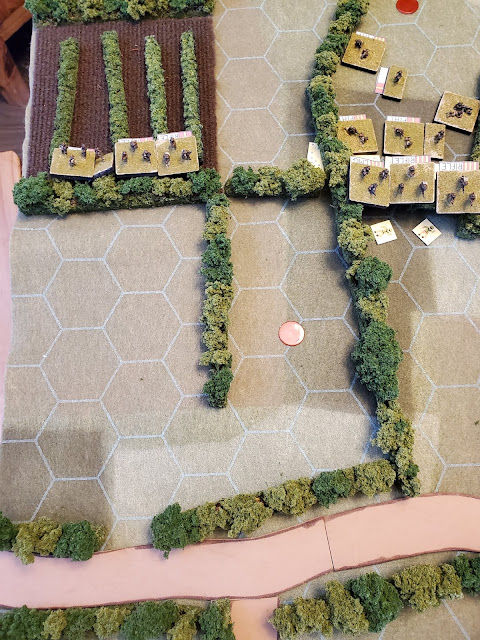 3rd Platoon decided to "Recon by Fire" the hedgerow across the field. They successfully found an entrenched German platoon. 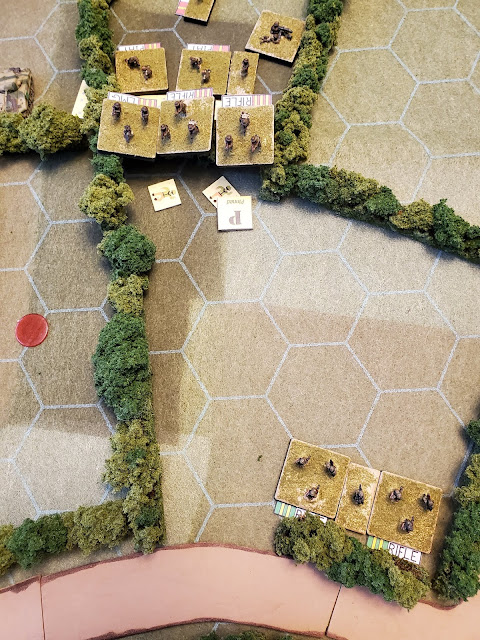 The Brits 1st Platoon was send forward again to out flank the German platoon. The Brit FO was able to lay down some smoke to cover their push. A trio of tanks also advanced to provide support. 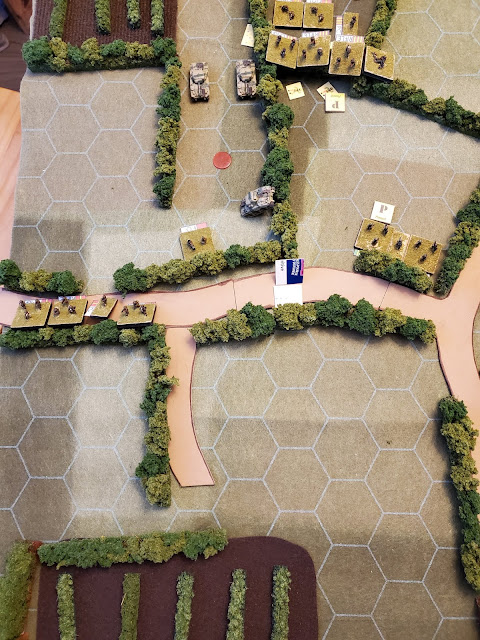 The Germans shifted a platoon with an HMG to cover their exposed left flank. 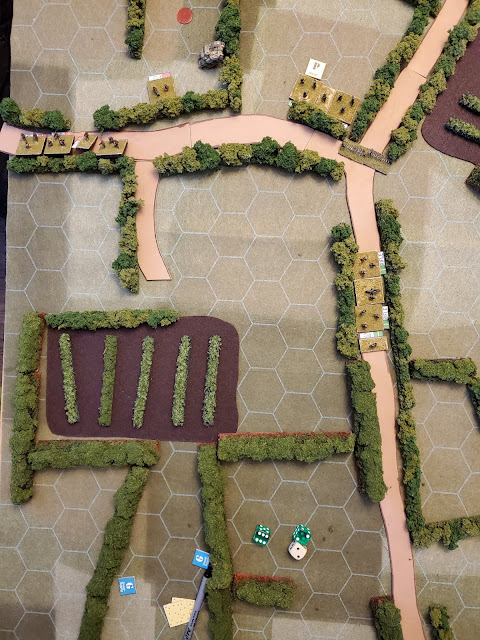 Brit 1st Platoon lost their nerve and decided to pull back. As they jumped out of the hedge and onto the road a German sniper took a shot at their platoon commander and suppressed him seizing the Initiative! 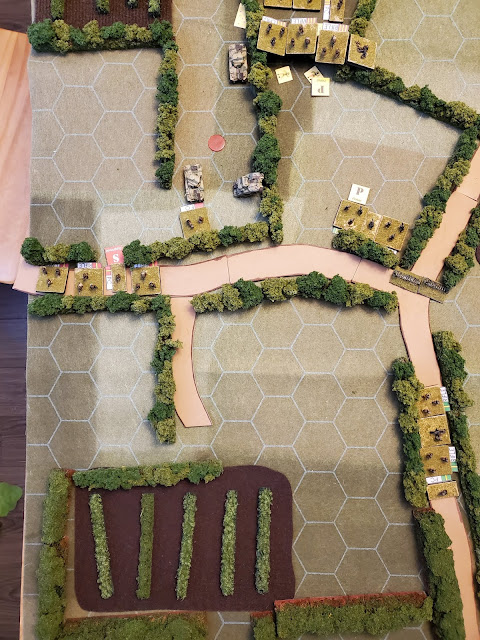 German 1st platoon pushed on their left flank wanting to shoot up the exposed brit 1st Platoon on the road. The German squads entered the hedge one at a time hoping to get the whole platoon set up on a firing line but one of the squads was suppressed. 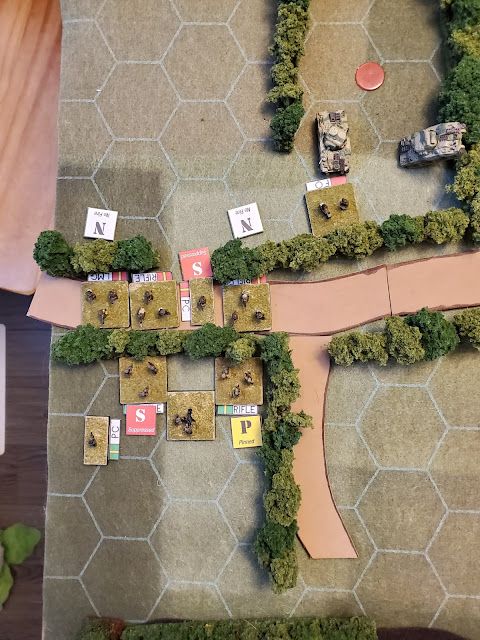 The Brits decided to try to take out the 2nd German platoon by assaulting them with the engineers from the flank. As they crossed the hedge one squad at a time one of the squads was Pinned. The Brits then opted to try and shoot the hell out of the German 2nd Platoon. It didn't work. 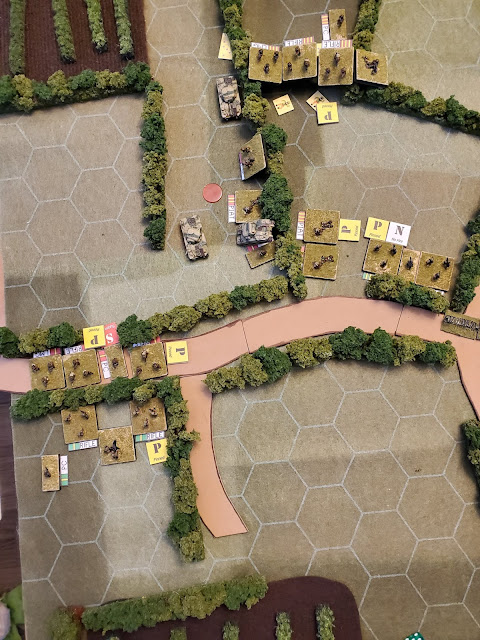 German 1st Platoon began to blaze away at the Britsh 1st, suppressing some of them. 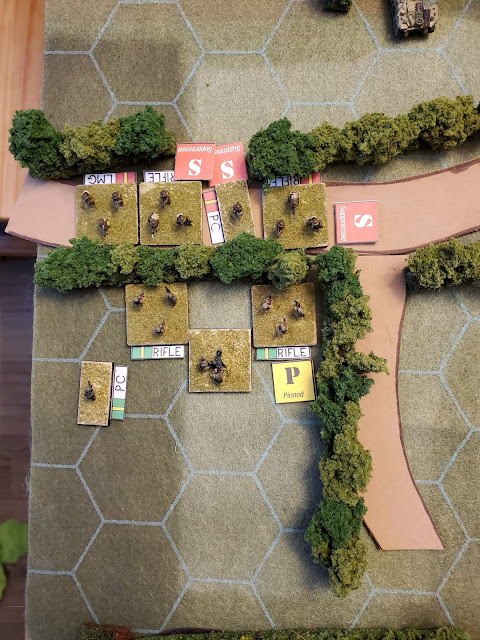 It now became a fire fight in two areas with both sides attempting to wipe out their opponent so they could be freed to maneuver. 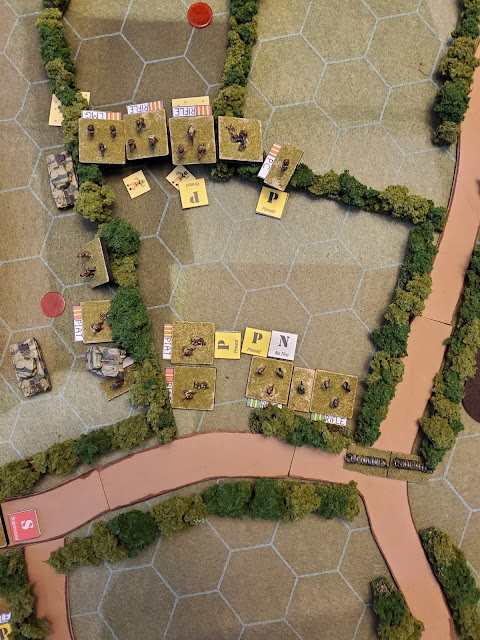 The British decided the move their uncommitted 2nd platoon down the main road. A German sniper pinned 2nd platoons commander in place. 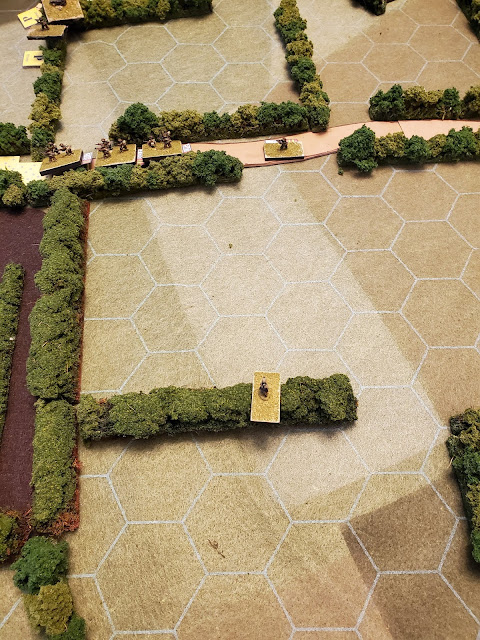 While the rest of 2nd platoon found itself divided as it ran into another mine field. This time the Brits were not so lucky. 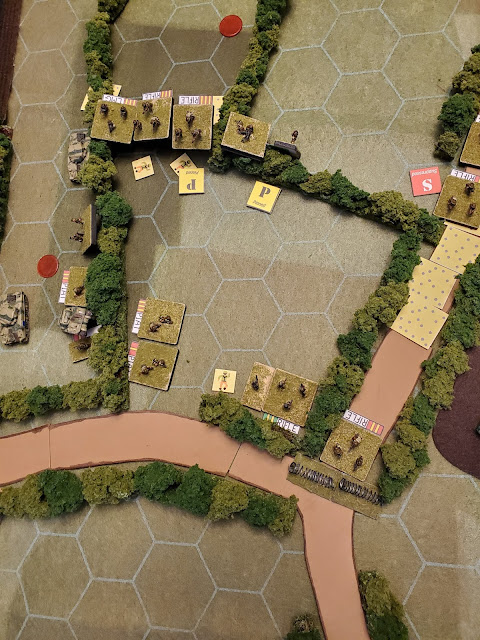 British 1st platoon was starting to melt as the Germans continued to shoot them up. 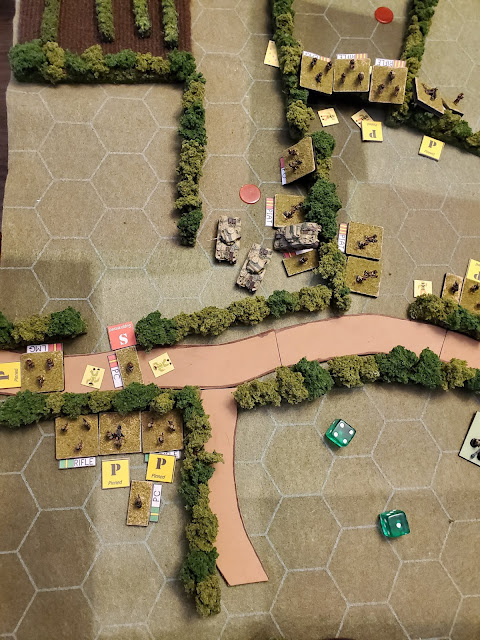 One squad from 2nd Platoon maneuvered to the German right flank and was able to penetrate the German line. 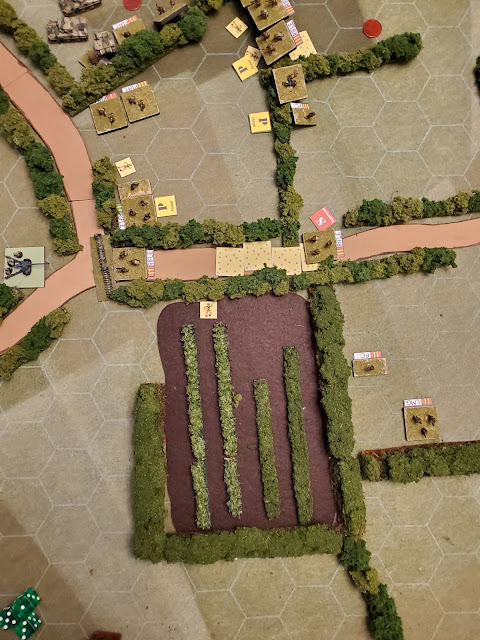 2nd platoon maneuvered right in front of a German Pak40, but the Pak40 couldn't score a hit even with an open field in front of them!! (Damn French wine!!) 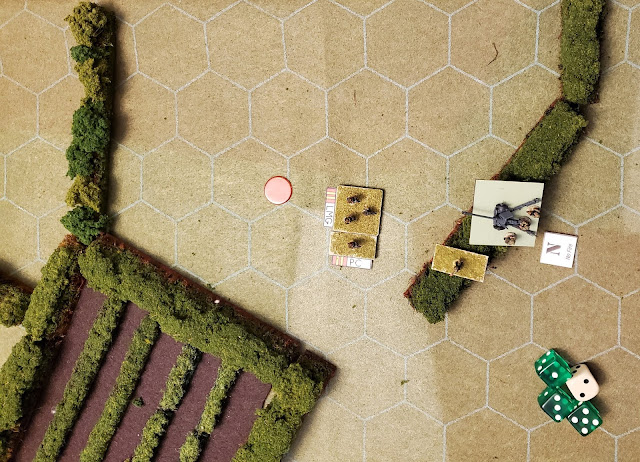 British 3rd platoon was able to get a suppression on the one remaining German squad holding the centre and with a great huzzah they assaulted and defeated the German squad. 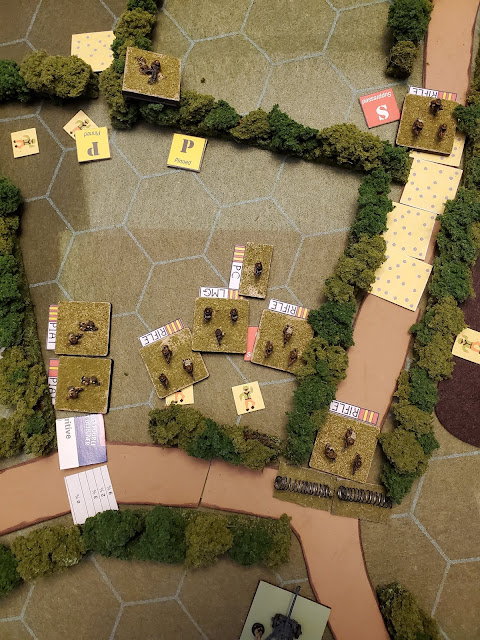 At this point we called it a game. The clock was not moving at all, only one hour had gone by and the Germans were left with one cornered platoon and two Anti tank guns in extremely isolated positions.

One of the reasons I like Crossfire is that it rewards maneuver. If you can pin down an enemy platoon its best to maneuver another platoon to engage it in the flank or rear.
And if you're the one who had a platoon pinned down, you better make sure you cover your flanks and try to pull your guys back before they get chewed up.

It was a fun game, thanks Brian. 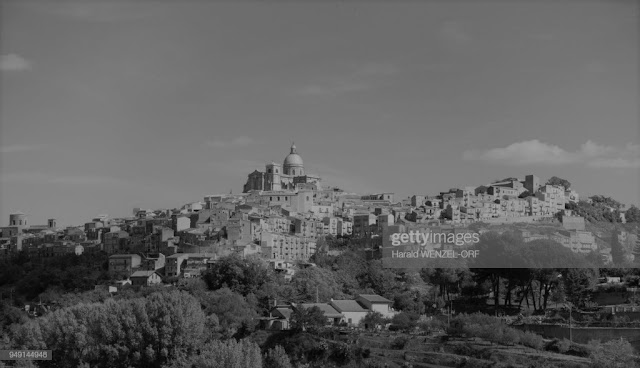 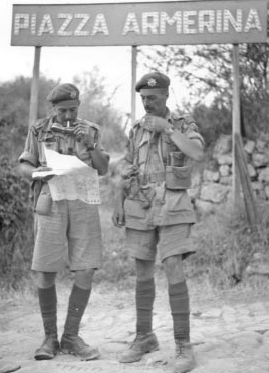 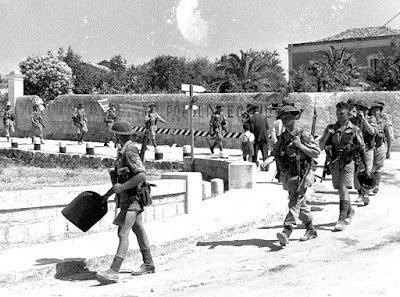